”Periodontal & Implant Associates is dedicated to providing the highest quality care in the most comforting and professional environment. Our patients’ well-being always comes first.”

What does LANAP® stand for?

LANAP is the acronym for “Laser-Assisted New Attachment Procedure” which is a nonsurgical procedure for treating gum disease. The “new attachment” refers to the way this laser treatment encourages the attachment of healthy gum tissue to the bone in your jaw.

The LANAP protocol is a patented periodontal treatment, cleared by the FDA in 2004. This procedure can only be done by a certified doctor using the PerioLase® MVP-7.

What is LANAP Laser Periodontal Therapy?

Research has linked gum disease to a variety of health complications like respiratory disease, rheumatoid arthritis, coronary artery disease, and diabetes, and should be considered a significant health risk. Until recently, gum disease treatments have been invasive and painful, usually involving cutting and removal of affected gums or extracting and replacing teeth with dentures or dental implants.

Recent advances in dental technology have provided us with a less invasive and more acute treatment for gum disease with the LANAP protocol (Laser Assisted New Attachment Procedure).

LANAP is the first and only FDA-cleared laser protocol on the market and the only scientifically proven method that results in true regeneration of the bone and gum tissues.

During a LANAP procedure, a specialized laser (the PerioLase MVP-7) is used to remove diseased tissue while keeping the healthy tissue intact. This laser uses variable speeds and wavelengths which allows for the targeted removal of diseased gum tissue and the bacteria that cause gum disease.

With this dental laser, we can selectively eradicate the bacteria from deep within the gum pockets without damaging the surrounding healthy gum tissues. This precise targeting of the diseased gum tissue leaves the freshly revealed and healthy gums which will reattach to the tooth.

LANAP is highly effective and can save teeth that otherwise would require extraction by promoting bone regeneration around the tooth.

Why use the PerioLase® MVP-7™?

The only type of laser that can be used for LANAP is the PerioLase MVP-7, which is designed specifically to support the LANAP protocol and is the only laser to be approved by the FDA for this use.

The PerioLase MVP-7 laser is a variably pulsed Nd:YAG (neodymium-doped yttrium-aluminum-garnet) laser and is ideal for removing only damaged tissue while leaving the healthy tissues completely intact. It has seven different settings for seven different pulse durations, each with a specific interaction with gum tissue.

These 7 adjustable pulse durations can be considered as 7 different lasers inside one device. The wavelengths used by this laser penetrate 4 millimeters into the surface of the gum and will explicitly target the diseased tissue of the gum while leaving the healthy gum tissue. Once the bacteria are removed, hemoglobin and the laser interact to form a clot which stops any bleeding and promotes tissue regeneration.

The laser also stimulates healthy gum tissue to create new attachments and improve the healing of your gums at a faster rate.

What are the Benefits of LANAP Laser Gum Surgery? 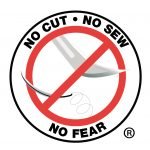 By preventing the gum tissue from detaching from the teeth and reducing the pocket depth between the gums and the teeth, the body can better recover from infection without the need for additional surgery.

How is LANAP Different than Traditional Treatments?

Before LANAP, advanced gum disease was corrected by performing invasive surgery. In traditional flap surgery, the dentist would use a scalpel to cut away the diseased gum tissue and reach the infected pockets in your bone or gums. The damaged gums would then be reshaped and filled with grafting material before being sutured closed.

This pre-laser methodology is still performed today and has a high success rate, but it is much more invasive than LANAP and is more likely to result in potential side effects like tooth sensitivity, gum line recession, and discomfort during healing.

Because LANAP® eliminates the need for cutting the gums to decrease pocket depth, there is little to no gum line recession or sensitivity and less discomfort.

Laser periodontal treatment uses a tiny but powerful laser to remove inflamed tissue. This laser can distinguish between diseased and healthy tissue because the diseased tissue is generally darker.

Therefore, the diseased tissue and bacteria can be removed with a high level of precision without compromising the healthy gum, tooth, and bone tissue.

The LANAP procedure is fairly quick and can often be completed in as little as one or two office visits.

Am I a Candidate for LANAP?

If you have been informed that you have gum disease, experience loose teeth, or bleeding from your gums during brushing, you may require gum treatment.

While LANAP is a highly effective treatment for gum disease, not every level of the disease requires surgical treatment. For early-stage gum disease, scaling & root planning (SRP) may be the only treatment that you need to restore the health of your teeth and gums

Patients with moderate-to-severe gum disease with bone or tissue loss can benefit most from the LANAP protocol.

For patients taking certain medications, such as blood thinners, the LANAP protocol has no contraindications, so patients do not have to stop taking any medications.

Since there is no cutting involved, the LANAP protocol is an excellent treatment option for patients who are fearful of conventional scalpel surgery.

A dentist consultation would be recommended, complete with x-rays, and a review of your medical and dental history. If you are a candidate for LANAP, our doctors will be glad to discuss your options for care so you can make an informed decision.

Please contact your nearby Periodontal & Implant Associates office for an appointment.

How Effective is LANAP?

LANAP has a high success rate in preventing the loss of a tooth and increasing the tissue attachment between the bone and gum.

Studies on the LANAP procedure show less tooth loss after laser surgery, as compared to traditional surgery. It also has been shown to aid in gum regeneration and increase new tissue attachments between the gum and bone.

Among patients who have LANAP performed, the recurrence rate of periodontal disease is less than those who have had traditional gum surgery.

The laser used for LANAP stimulates the regeneration and attachment of the tooth root. Teeth formally considered beyond repair can now be saved and restored to their full functionality

As LANAP eliminates the need for sutures, the gums can heal under ideal conditions and regenerate faster.

In very severe cases, LANAP may be combined with other treatment options.

What Should I Expect During the LANAP Procedure?

Unlike traditional flap surgery which requires cutting deep into the tissue of a patient’s gums, LANAP requires absolutely no cutting and sewing.

Instead of scalpels and sewing, this treatment relies on the use of a PerioLase MVP-7 laser which can directly target harmful bacteria and infection and clean out the gum pockets.

To begin the LANAP protocol procedure, the dentist will administer a local anesthetic to the gums.

The doctor will then begin using the laser to remove the diseased tissue and loosen the calculus (tartar) from the root surface of the tooth. This tiny laser beam (about as thick as three strands of hair) is inserted between the numbed gum tissue and the affected tooth.

During the process of destroying diseased tissue, the laser activates proteins that are known as “growth factors”, which stimulate the regeneration and growth of healthy tissue, new periodontal ligament, cementum, and alveolar bone cells.

Next, the doctor will use ultrasonic instruments to remove the calculus from the surface of the tooth and prepare the root of the tooth for reattachment to the gums. Deep cleaning of the roots is necessary to remove plaque and tartar from below the gum line.

Once the site is clean, the laser is used with a different setting to sterilize the pocket and close the surgical area. This laser now interacts with the hemoglobin and creates a firm fibrin blood clot that seals the periodontal pocket around the tooth allowing for healing to begin from beneath the gums.

Generally, only one side of the mouth will be treated during a session, and patients can comfortably drive themselves home and resume normal activities following their procedure. 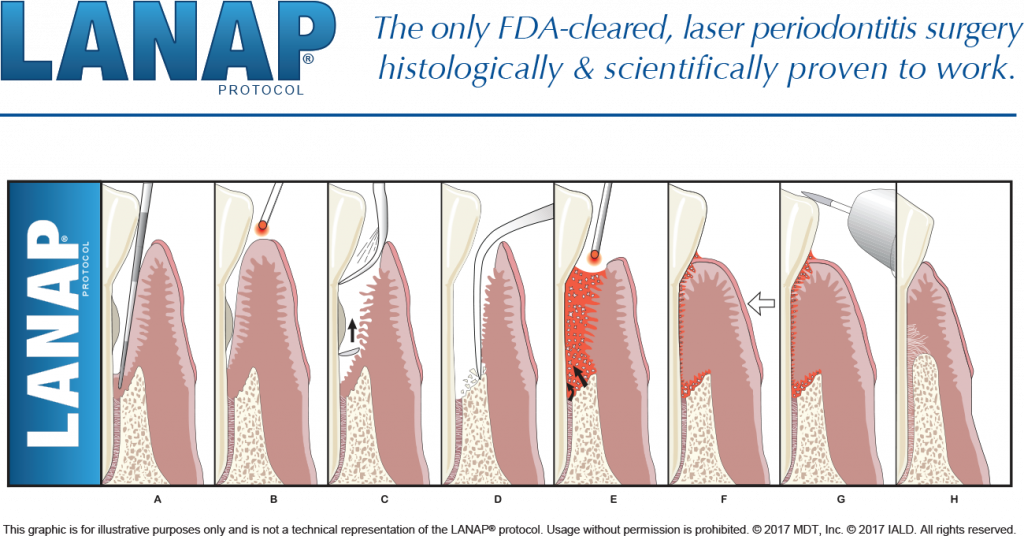 What should I expect after the LANAP Procedure?

The LANAP procedure may cause mild tenderness, swelling, bleeding, and tooth sensitivity.

If necessary, an ice pack may be placed against the outside of the cheek for twenty-minute periods to reduce swelling and soreness or tenderness.

After your LANAP procedure, a diet of soft foods is recommended. You will be given specific dietary instructions and home care guidelines after LANAP surgery.

How long does the LANAP Procedure Take?

The laser portion of your dental treatment normally only takes a few minutes. Depending on the severity of the periodontal disease, your treatment may be accomplished in one office visit or multiple visits.

The estimated treatment time will be reviewed with patients when we discuss their treatment plan.

LANAP periodontal surgery is a full mouth procedure and is usually completed in two 2-hour visits. During each visit, we will complete one side of the mouth. Surgeries are usually scheduled within one week of one another.

It is possible for the LANAP protocol to treat the entire mouth in one session, though most patients prefer to split the procedure into two sessions based on chair time and comfort.

How Much Does the LANAP Procedure Cost?

In most cases, the cost of laser dentistry is similar to the cost of traditional dental surgery. In some cases, using the laser is necessary for successful treatment.

As there is a higher long-term success rate with laser dentistry, the likelihood of incurring additional costs from multiple treatments is decreased. Overall, the benefits far outweigh the costs.

Since everyone does not present with the same issues, we urge you to schedule a consultation with Periodontal & Implant Associates so that we can review all the possibilities for you to make an informed decision about your healthcare options.

Do You Take My Insurance for Lanap Gum Laser Treatment?

For more information about specific insurance companies please see our page: Financial Options and Dental Insurance Information or contact our office and we will gladly discuss the best option for you.

What Training Does a LANAP Dentist Have?

To perform the LANAP procedure, a doctor must earn a LANAP Proficiency certificate.

LANAP certification requires comprehensive, hands-on, dentist-to-dentist training for a year at the Institute for Advanced Laser Dentistry (IALD). This in-depth training ensures that doctors are skilled to perform the LANAP protocol.

Why Should I Choose the Periodontal & Implant Associates for my LANAP Procedure?

The award-winning dentists at Periodontal & Implant Associates are committed to excellence and exceeding the expectations of our patients.

The periodontists at Periodontal & Implant Associates have all completed extensive, hands-on, dentist-to-dentist training and have been certified to use the PerioLase MVP-7 dental laser.

Our team takes a personalized approach — the right treatment for you will depend on your situation, your comfort level, and your goals.

Periodontal & Implant Associates has 5 convenient locations so you should be able to find a LANAP provider near you.

Are you wondering whether LANAP surgery is right for you? We would love to answer your questions.

More information about the LANAP Protocol

Selectivity of the PerioLase MVP-7

Treating Periodontitis in an 18-year-old Patient

Further Reading about the LANAP Procedure:

Find a LANAP certified dentist near me

Laser treatment is a great option for most dental patients, but it may not be the appropriate method for all cases.

The use of this laser is part of an overall treatment plan that involves oral hygiene instruction, adherence to maintenance care, and possibly other courses of action determined by your doctor.

If you’re interested in learning more about the LANAP protocol and finding out if LANAP is the best solution for your teeth, please contact our office to schedule a consultation by calling or emailing one of the following locations: